In One Voice, We Call for the Answer to Peace: Peace Letter Campaign

Starting from 14 March 2019, the “Peace Letter Campaign”, in which the citizens from across the globe send their handwritten letters urging the heads of state in their respective countries to support the DPCW with the slogan “In One Voice, We Call for the Answer to Peace”, has now begun simultaneously around the world.

On this day, the 3rd Annual Commemoration of the Declaration of Peace and Cessation of War (DPCW) was held in Jamsil Indoor Stadium, Seoul Sports Complex. At this event, around 30,000 people, including experts in various fields such as politics, civil society, education, religion and more, as well as a large number of citizens, attended and wrote their own Peace Letters. The Peace Letters written on this day were sent simultaneously to the heads of state in 193 countries around the world. 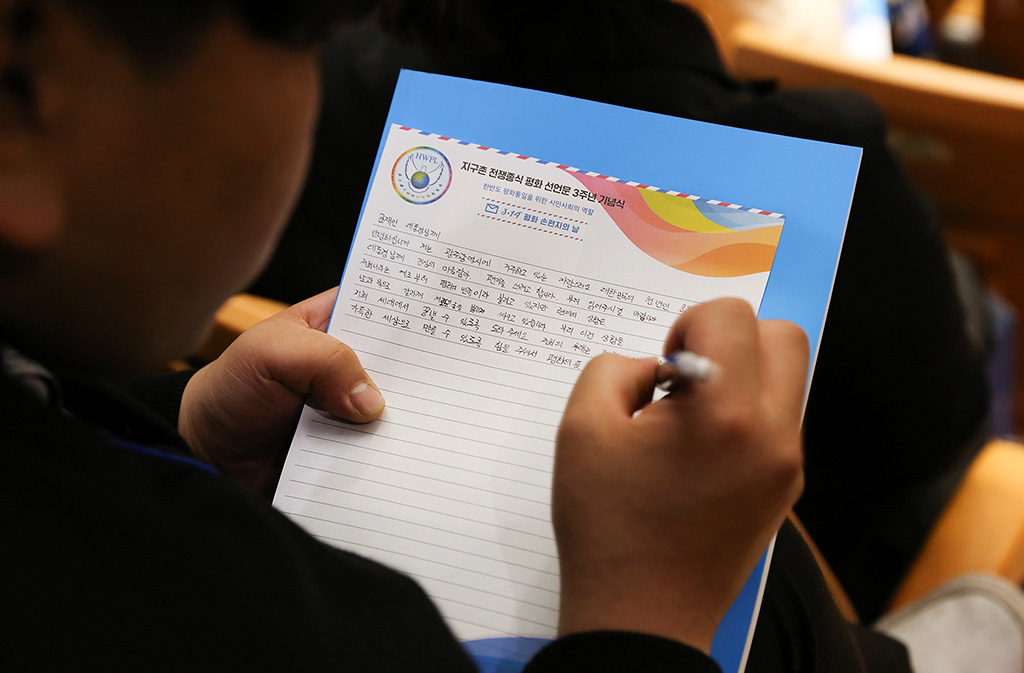 The Peace Letter Campaign began as an effort to compel national leaders to advocate for the adoption of the DPCW by the UN General Assembly in the form of a binding resolution. Last year, the members of the International Peace Youth Group (IPYG) sent around 200,000 letters to the heads of state from all UN member states through the Peace Letter Campaign.

The Declaration of Peace and Cessation of War (DPCW), consisting of 10 articles and 38 clauses, proposes a solution aimed at ceasing wars and guaranteeing peace. It was drafted by the HWPL International Law Peace Committee and proclaimed by HWPL, which became associated with the UN Department of Global Communications (DGC) and Economic and Social Council (ECOSOC) in 2016. Since that time, HWPL has been introducing the DPCW by visiting various countries around the world throughout its 30 World Peace Tours.

Furthermore, as a result of the members of women, youth, and civic organizations putting forth passionate effort in collaboration with HWPL for the adoption of the DPCW by the UN General Assembly, the DPCW has been endorsed by prestigious international organizations including PARLACEN (Central American Parliament), the parliamentary body of six Central American countries; the Pan-African Parliament (PAP), the legislative body of the African Union consisting of 55 African countries; and the International Centre for Black Sea-Baltic Studies and Consensus Practices, whose members consist of former heads of state who led Eastern Europe’s peaceful transition to democracy.

The Peace Letters show the hearts of people urging for the adoption of the DPCW by the UN General Assembly in the form of a binding resolution. Currently, the DPCW is receiving attention from the world as a solution to world peace because it presents itself as such by including articles relevant to the unification of the Korean Peninsula and regarding the complete cessation of war.

Also, the letters show the citizens’ hope for each head of state to not be remembered as a president who wanted and supported war that would last into the future generations. The Peace Letter Campaign emphasizes the necessity of peace and unification of the Korean Peninsula and advocates for the adoption of the DPCW by the UN General Assembly which will take place in September this year. This campaign is especially meaningful because citizens are the ones taking the lead to realize peace in the world.

Peace is the hope of everyone living in this world, which is now suffering from conflicts and wars. It is also the duty of this generation to leave peace as a legacy for future generations, transcending borders, race, and religion. Hundreds of thousands of handwritten Peace Letters, which are like the seeds of the flower of peace, will blossom into a spring of peace in the world soon.

Anyone can participate in the “Peace Letter Campaign” through the online PEACE INITIATIVE page found at: http://peaceinitiative.net/peace-letter/

« 3rd Annual Commemoration of the Declaration of Peace and Cessation of War (DPCW) (Previous News)
(Next News) [30th World Peace Tour] For the Freedom of Religion and Peace: 7 Religions Hold a Combined Event »